This page is considered sedimental, meaning that is regarded as an anchor of knowledge retaining to Super Mario 64. This may include anomalies commonly depicted as canon, or ideas that form the basis of the Super Mario 64 rabbit hole.

The Wario Apparition is an uncommon anomalous entity in Super Mario 64, and perhaps one of the most popular Super Mario 64-related legends. The entity takes its likeness from Wario, another established character from the Mario series who was growing in popularity by Super Mario 64's release.

Despite neglect from Nintendo, it is referenced in their "Focused on Fun" panel from E3 of 1996[1]. With its appearance at E3 1996 and the resurgence in Super Mario 64 phenomena in 2020, the Wario Apparation grew to meme status within the community and became one of the most known anomalies in Super Mario 64.

The appearance of the Wario Apparation, much like other unusual instances, is not guaranteed in a Super Mario 64 playthrough. Its appearance is instead determined by the Personalisation A.I., but what causes it to summon the apparition is unknown. However, the appearance of the White-eyed Chomp is a usual disclaimer that the Wario Apparation, as well as a few other anomalies, are set to appear in the player's walkthrough.

The Wario Apparition is usually set to appear in the room beyond the 30-star door in the basement, which leads to the ninth level of the game, Dire Dire Docks. After catching sight of the player, the floating head starts chasing the player down the now endless hall. The disembodied head will start chomping viscously and start laughing maniacally[2] while chasing the happy-go-lucky plumber. However, the Wario Apparition's behaviour can also vary between player to player.

An unused track belonging to the Wario Apparition has supposedly been dug up by Youtuber Planet Bobstar, and can be viewed here. The music appears to be coupled with unused voice clips of Wario laughing, which would later go on to be reused in Mario Kart 64. The description of the video discusses how he and a group of dedicated dataminers were able to extract the music, while also giving warning to not interact with players who have experienced the Wario Apparition as they will enter a state of catatonia.

In a later video[3], Planet Bobstar claims that the videos were fake. However in that video, the way he words it (most notably "I'd like to thank Nintendo for allowing me to speak") it could be him being paid off or threatened by Nintendo to keep quiet about the truth.

The Wario Apparation appears twice in Greenio's Odd Findings. In both please-walk-quietly-in-the-hallway.mp4 and coming-christmas-1995.mp4, the Wario Apparition appears in the Dire, Dire Docks hallway. His mere existence causes the footage to fade out and the audio to grow louder, before the footage abruptly cuts to something else.

While this theory is the most popular, it goes against many of the limitations recorded from the personalisation. This includes its supposed ability to read the player's thoughts and desires, and then its ability to inflict strokes upon the player. Although, the strokes inflicted on players may in fact be real and be caused by the shock of experiencing the Wario Apparation.

Another theory, acting as an extension of the unused boss theory, claims that the Wario Apparation as a boss fight was not intended to be in the game. Instead, it is the Personalisation A.I. trying to create a new boss out of unused elements. This theory would imply that Wario wasn't intended to be a boss, but still intended to appear in Super Mario 64 in some way. This theory, coupled with the Benevolent A.I. theory, paints that the personalisation algorithms are just trying to create a new and engaging experience for Super Mario 64, without the self-awareness of what it's creating is disturbing and unusual.

The battle begins against the Wario Apparition, where he is able to break through the castle walls and fire projectiles at Mario. To attack the apparition, the player had to stun Wario's floating head with a dive and then ground pound on its head. They had to do this five times before the Wario Apparition was finally defeated, where they seem to congratulate the player. Upon being defeated, it leaves a star for Mario and the portal opens up to allow Mario into Bowser in the Fire Sea.

If this claim is true, it can be assumed that the Wario Apparition could've originally been removed due to its high difficulty. Then the A.I. which governs Super Mario 64's personalisation could take the remnants of the boss and reform it, for those looking for a challenge.

The Wario Land 64 theory claims that the Wario Apparition is actually a fragment of programming from the unfinished game, taking the form of one of Wario's Power-Up states (specifically, that of the Ghost Spider; that allowed him to turn into a floating, giant head).

After being charged with the task of getting rid of all of the unwanted content, the devs fused the original build's content and Wario Land 64's, accidentally originating the Apparition.

A possible photo of the Wario Apparition chasing Mario down a hallway. 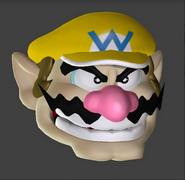 A fan-made recreation of the Wario Apparition.