This page is considered sedimental, meaning that is regarded as an anchor of knowledge retaining to Super Mario 64. This may include anomalies commonly depicted as canon, or ideas that form the basis of the Super Mario 64 rabbit hole.

The July 29th, 1995 build of Super Mario 64, also known as the 1995/07/29 build, is an anomalous and mysterious build. It dates back to before the Ultra 64 (the initial name for the Nintendo 64) was patented, making it perhaps the oldest piece of Nintendo 64 history.

Because of the sensitive nature of the build's contents, research on the 1995/07/29 build of Super Mario 64 is highly discouraged. It is on the infamous iceberg discussing Super Mario 64's anomalies.

It is possible that the 1995/07/29 build wasn't even related to Mario or created by Nintendo. Instead, it was created by an unknown Japanese organization that produced the technology responsible for Super Mario 64's ability to personalize itself to its player's likeness. This build would then be sold to Nintendo and reworked into Super Mario 64.

This build allegedly has an intense texture bug, which causes the textures to change colors rapidly and induce seizures within playtesters. It's rumored these playtesters would experience horrific, hellish and nightmarish hallucinations, which seem to be the origins of some of Super Mario 64's most horrific anomalies.

An anonymous user wrote of their experience talking to a foreign friend from Japan back in 1995. Their friend used to work at Nintendo, and he remarks of his time working there and working on the very first build of Super Mario 64.

The former programmer and his team were handed the prototype after Nintendo bought it from another Japanese company. The team was tasked with cleaning up the prototype for the Ultra 64. The programmer explains how this build bore no resemblance to the happy-go-lucky Mario franchise, and instead was a rather desolate build. He doesn't recall the appearance of the player character, but refers to them as looking instead "simplistic, like a low-poly ordinary man."

The programmer goes into great detail in the basement. The basement was a lot darker in this build and had rather advanced fog for Nintendo 64 standards. According to the programmer, the basement acted as a testing ground for an experimental artificial intelligence that would track the player's "cognitive desires" and subvert them. With this, the basement would usually span endlessly like a labyrinth. One playtester, whom the team neglected to check on before leaving the office for the night, was still playing the game in a delirious and crazed state. He was taken to the hospital shortly after being found, and later playtesters were urged not to enter the basement.

When asked about the upper floors, the programmer said that there wasn't much interesting up there; it was a boring and thin spiral staircase that led up to what seems to be a bedroom. He was surprised to hear about a supposed fourth floor and says that "considering Nintendo made the castle bigger with the use of sub-areas, it wouldn't be surprising that they would try to add yet another floor."

A throwaway account by the name of 1995SMB2276 commented on this page explaining how their uncle used to work at Nintendo, and was around in Japan at the time of the 1995 build's playtesting phase. His first post reads as follows:

"Back in 1995 my uncle was an intern at Nintendo and was often tasked with odd jobs that varied from errand running, transcribing, organizing, etc. I heard about the 1995/07/29 build and related phenomena (the Wario apparition, the Bowser room, and so on) a week ago and decided to ask what he knew about it; given that he was living in Japan at the time and doing work at Nintendo, I figured it was worth a try.

As it turns out, he was tasked with recording playability, functionality, bugs, etc. found in playtesting. He’s said he’s willing to share the info, and will attempt to translate it back to English (but may have trouble as he’s been out of practice for 17~ years and was never very fluent to begin with), as long as I keep all of his and the playtesters personal info/identifiers secure; it’s a risky move but he’s as interested in piecing the mystery together as I am. Unfortunately, he doesn’t own any other kind of documentation and never knew anything about the company the game belonged to prior so nothing else can be contributed. Given that this was an unpaid overseas internship at an insanely small branch which was closed soon after the matter, it’s unlikely this can get him into much trouble if we’re careful about it.

I’ll either reply to myself or make a new comment here when I can provide everything. I’ll be on the same account (throwaway for this topic so I can maintain anonymity + proof that I’m the same person when I give updates)."

After his first post, he would upload four images: the first was a screenshot of an email between him and his uncle, and the other three are the scans that came with that email. 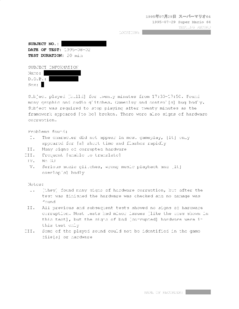 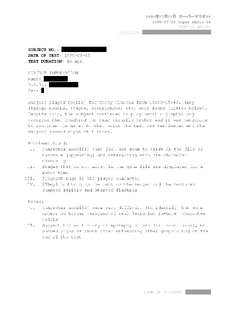 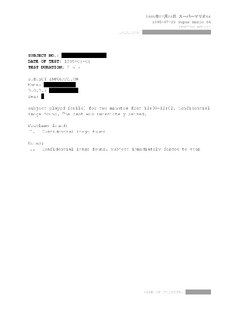 On April 7th, 2003, VHS recordings were made by a player in possession of what may be the 1995 build. Though, it remains unclear if it was a definite copy. There is speculation that areas in the game exist where the source code will be severely disrupted and possibly altered. Albeit, this could be passed off as a compiler issue. These videos have likely shown such rumored disturbances, including visual corruption and distortion. But the full videos have since long been lost to time. Only a handful of screenshots remain of one of them along with descriptions of the scenes where said screenshots were taken, listed below.

What is noteworthy is that throughout the video, the time stamp overlay on the VCR remained frozen to "AM 04:58, APR. 07 2003". This may be an issue from the VCR itself. But it may also be from the game interfering with the camera's systems.

The first of these disturbances was captured in "Bowser's Steps". A drastic drop in color contrast occured as well as a distortion in the game's audio. This gave off an unsettling, uneasy atmosphere surrounding the stairs. Later, the game would slightly corrupt itself, causing the player's position to move out from the area. This could be a compiling error or a memory overflow, presumably caused or affected by the rogue A.I. Suddenly, the recording abruptly cuts out for about a minute. What happened within this time gap remains only a mystery. Speculation arises from what was on the other side of the door in Bowser's Steps (pictured), including either the Wario Apparition or Bowser's level.

2. Jumping in the hall

This second screenshot is likely taken in the hallway leading to Bowser's Stairs. In this section, the video quality is greatly reduced. Judging from the black lines at the top of the screen, the game may be disrupting the video signal and the TV's refresh rate, something not easily configured. The hallway itself appears to be much shorter than in other copies, presumably by the Personalization A.I. generating new experiences. However, interesting to note is in the recording was that the player was heading towards the castle's courtyard from the hallway. But as they entered the doorway, the intended door-opening transition sequence instead uses the level-opening transition. There, the game's corruption began to show as the video's signal and audio began disrupting once more.

This final screenshot is by far the most mysterious and unusual. Mario appears to be swimming underwater. But the area or location is unclear; only a mere black background. What is known is that in the original footage, the TV screen briefly displays an unspecified level painting before cutting back to Mario falling into black, murky water. As he swims to an opening, the TV's static begins to interfere with the screen's visibility. It is also apparent that sharping beeping tones are heard as Mario heads into the opening, reminiscent of an Emergency Alert System warning broadcast. Finally, the video ends with what seems to be an error screen displayed. However, it was only text reading "神聖な虐殺" (Shinseina gyakusatsu, "Sacred Massacre"). It's not certain what the phrase relates to and remains a mystery.