Princess Peach's Castle is a recurring locale in the Mario universe, being the royal castle of Princess Peach. The expansive castle serves as the hub world of Super Mario 64, with the paintings acting as the portals between the game's several levels. In Super Mario 64's story, Bowser infiltrated the castle and trapped all the Toads and Power Stars within the castle walls.

The area immediately surrounding the castle and where the player begins the game upon startup. It features lush green grass and dusty yellow pathways leading both to the castle's bridge and around to the castle's side yard and a waterfall feeding into a moat that subsequently empties into what is either a river or the sea. Upon collecting 120 Power Stars, a cannon opens up near the said body of water, allowing the player to reach the top of the castle where they can meet Yoshi. There are generally no full stages in this area, but it contains the hidden course Vanish Cap Under the Moat that is accessible upon draining the moat from inside the Basement.

The first area encountered upon entering the castle proper, made up of the castle's foyer, various hallways and galleries, and entrances to the other areas of the castle. Much of this area is brightly colored, with the walls painted to resemble the scenery from earlier Mario games with green mountains, blue skies, and white clouds. This area generally contains the entrances to a large portion of the courses in most copies of Super Mario 64, including but not limited to Bob-omb Battlefield, Whomp's Fortress, and Princess's Secret Slide.

The Courtyard is a small, secluded area of the castle found by exiting the rear of the building. Surrounded by brown brick walls and filled with trees, the area is generally unremarkable in lightly personalized versions, save for being home to a fountain containing the Eternal Star Statue. After collecting 13 Power Stars, the courtyard becomes haunted by Boos and becomes host to the fifth course in the game, Big Boo's Haunt. In some rare copies of the game, the courtyard is seemingly replaced by an anomalous area known as the Castle Garden.

The second large area of the castle, the basement is unlocked by defeating Bowser in Bowser in the Dark World. Primarily made up of a twisting, sewer-like hallway and other branching rooms and hallways, the basement is home to perhaps the most (in)famous anomaly in personalized copies of Super Mario 64, the Wario Apparition. This area contains entrances to several more courses, each with anomalies of their own, such as Lethal Lava Land, Hazy Maze Cave, and Dire Dire Docks.

The third area of the castle, the second floor, unlocked after defeating Bowser in Bowser in the Fire Sea, Accessed from a spiral staircase from the foyer, the second floor of the castle is made up of a circular hallway and the rooms that offshoot from it. The second floor is a vital component in the Personalisation A.I., hosting both Wet-Dry World (theorized to be the location of the A.I.'s "brain") and the Mirror Room, a location host to various anomalous phenomena. The second floor is also home to Tall, Tall Mountain, Tiny-Huge Island, and Snowman's Land in the majority of Super Mario 64 cartridges. Unlike the other main areas of Super Mario 64, there is no boss fight required to move on to the next floor.

The final area of Super Mario 64, the third floor, consists of a single large, blue room containing a giant clock. There is little anomalous activity reported for this area, although the third floor of the castle does most resemble the castle, as seen in early prerelease footage. The only level entrances found here, aside from hidden courses, are those leading to Tick Tock Clock, Rainbow Ride, and the final course of the game, Bowser in the Sky.

The Rec Room is an area exclusive to Super Mario 64 DS, containing the path to Goomboss Battle and Sunshine Isles, as well as various minigames unlocked by catching Rabbits throughout the game. This area has been reported to anomalously appear in some personalized copies of Super Mario 64.

Found in the patent for the Ultra 64 (the original name for the Nintendo 64) are six images displaying Princess Peach's Castle in greyscale. These images show a slightly different version of the castle. Most notably, the stained glass window is now a clock, and there's a massive cloud that intersects the central tower of the castle.

The outside of the castle appears mostly unchanged from the patent aside from the removal of the cloud and other minor changes. The interior is vastly different from how it appears in the release. One difference is that in the released version, the walls were painted to look like a sunny meadow. In this version, however, it is painted to look more like a twilight sky with oranges at the bottom and dark blues at the top of the walls. The stairs that lead up to the second floor are also notably missing. Instead replaced with two giant steps, Mario has to jump up.

In the center of the castle courtyard, a star statue can be found in the middle of the fountain. Underneath it is a plaque with ambiguous writing. The most popular interpretation of this plaque is that it reads "L is Real 2401", leading many to believe that Luigi is hidden somewhere in the game and that the number "2401" relates to how he must be unlocked. Other interpretations are that it reads "Eternal Star."

Most interpretations of the fourth floor have spanning halls that seem to go on endlessly, with rows of Boos floating through the hall aimlessly though some players have also seen Waluigi here.

Also known as the second basement, or Floor 2B (although the term has shifted to refer to an alternative second floor), the Catacombs appear rarely on certain copies of Super Mario 64. The appearances of the Catacombs vary wildly, with some describing it as an endless metal or stone-walled maze, with some describing it as similar to the Fourth Floor, with a myriad of descriptions inbetween.

Seen on the save select screen of Super Mario 64 DS. There is a strange black box that can be seen on one of the back spires of the castle. It's situated high on the wall, and what it was intended for is unknown. It might actually be an opening in the wall based on its placement; in that case, it might have lead to a lost area. It's unclear what it exactly is because of the low resolution of the texture. This very same box can also be seen in pre-release gameplay of Super Mario 64 DS, back when it was called Super Mario 64x4.

The Castle Garden is an anomalous form of the Castle Courtyard with very few attributes in comparison to the Castle Courtyard. The area itself usually only has flower patches, trees, and a sign, with unique geometry. It also usually leads to a dark room containing a Toad and a door to another location.

The Castle Dungeon is an anomalous sub-area of the Basement, consisting of around 3 rooms that are reportedly: a hallway, a room with a painting, and a room with coins along the sides. There are also commonly bars blocking off empty rooms. It can lead to 2 documented levels, Fox Forest and Bully Beach.

The Peaceful Grounds are an anomalous garden-like area usually found somewhere in the Castle Grounds. It usually appears as a round, walled off area with grass and several Toads. It can branch off into 3 documented levels: The Castle in the Sun, the Haunted Ship, and the Peaceful Garden. It also has a supposed lower level.

The Goomba Courtyard is anomalous form of the Castle Courtyard that has several Goombas scattered throughout. It is usually missing Boos, making Big Boo's Haunt impossible to access unless alternate means manifest. The area itself does not have much more notable traits other than a slight change of geometry being reportedly possible.

Bowser's Domain is an anomalous floor found by entering a second trapdoor behind the invisible wall in the hallway leading to Bowser in the Dark World. It takes the appearance of a large maze with no documented levels, though can contain the anomalous Bowser Room and a way to unlock Luigi, as well as several unique paintings.

The Minor Anomalous Locations of Princess Peach's Castle that are usually too small to be considered their own areas or castle floors, though still act as a significant anomalous area or contain any amount of anomalies, and are also reported enough to have a general idea of the area. Most of these areas were likely playground rumors before the Personalization A.I. was discovered.

It's commonly theorized that the castle is a physical manifestation and representation of the A.I., which personalizes and adapts Super Mario 64 to the player's desires. The castle's intricate and bizarre layout could be a result of the A.I.'s intricate inner workings, with the castle's very walls and rooms representing the A.I.'s vessels and nerves.

This hypothesis is supported by a former developer's anecdote about the fabled 1995/07/29 build of the game. Here he describes that the basement of the castle was used as a testing ground for the A.I.'s ability to adapt to players, creating an endless labyrinth for players to run through. An unfortunate playtester was apparently driven insane by endlessly wandering the basement. The fact that the castle now appears bigger in the retail copy only implies that the A.I. has grown more since the 1995/07/29 build.

Supposedly, Princess Peach's Castle is a remodeling of Wario's Castle, from the scrapped Wario Land 64, that served as an early prototype to Super Mario 64.

The outside of the castle looks extremely different: It's now mainly colored in a dark grey, the red parts of the outside of the castle have been replaced by yellow; the windows are more scrappy and less cartoony, and they have purple accents; and most notably, the large Peach painting has been replaced by a gigantic silver W. Additionally, the sky is grey and full of clouds; the valley around the castle's trees are now leafless and black, and the valley is noticeably smaller, too. While the waterfall and the water below the castle stay the same, there is a large door with a whole new texture in the center of it, leading to a certain dungeon-themed level from the prototype.

The interior's layout itself hasn't changed at all, but the textures have, in its entirety. The castle walls' textures have changed to resemble gold walls, with symbols that reference Wario around them. There are also several small portraits of Wario, money, and garlic; some of these smaller portraits have been graffitied. The portrait rooms also have different wall textures that resemble the main parlor. The portraits, of course, have changed to resemble the game's levels. 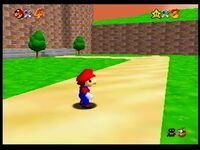 Youtube user Jefftastic, who was responsible for documenting cases of DLR and the Flying Fortress, discovered a strange version of the castle courtyard, named the "Castle Garden." Unlike the courtyard, which only boasts trees and a fountain, the Castle Garden has a grassy area with flowers and a path that extends to a sign and a door on the left. This door leads Mario to a dark room, where a lonesome Toad questions why he isn't out saving the other Toads and Peach from the castle walls. There's another door in the dark room, although upon entering it, the game crashes.