Welcome to the MIPS Hole wiki, a collaborative wiki dedicated to documenting the boom in Super Mario 64 phenomena. This is a more literal take on the story proposed on 4chan long ago, rationalising and reimagining things such as the Wario Apparition, "Every copy of Super Mario 64 is personalised" and more.

Before editing on the wiki, please read the Rules and Guidelines before contributing to the wiki! Additionally, read the Community Canon to learn the ropes about what's accepted and not accepted in the lore! 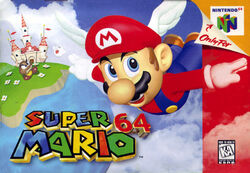 While Super Mario 64 might've released to critical acclaim and is still treated as a cult classic, underneath the joyous layers of Super Mario lies an insidious monster of human creation. An artificial intelligence so advanced that it examines the player, and reshapes the game to their deepest desire. Innocent intent, but when the system starts throwing curveballs at the player, that's when the most monstrous creations and anomalies of the A.I. come out.

Areas
Add a photo to this gallery

Join the server to be apart of the community and create ideas!

MariOS 64 was a cancelled operating system/GUI developed by Nintendo that was supposed to be a mixture between a personal computer, the game Super Mario 64, and an engine used to modify/make user-made content for the game.

Retrieved from "https://sm64-conspiracies.fandom.com/wiki/MIPS_Hole_Wiki?oldid=2670"
Community content is available under CC-BY-SA unless otherwise noted.