MIPS is a rabbit that appears exclusively in Super Mario 64 within the basement after a certain amount of stars are collected. After fifteen stars, he will appear and run away from the player. If caught, he'll give the player a star. After fifty stars, he'll reappear again with the same gimmick, and give the player a second star.

The rabbit's name is derived from the MIPS microprocessor, Microprocessor without Interlocked Pipeline Stages, which is the instruction set used within the Nintendo 64. MIPS was actually one of the first characters modeled for Super Mario 64 hardware alongside Mario himself, where in an early prototype he would follow Mario around. He was kept due to a fondness by Nintendo staff[1].

In Super Mario 64 DS, MIPS does not return and is instead replaced by a group of rabbits. Internally, these rabbits are known as "MIP" and drop keys called "MIP Keys".

In Super Mario 64's development, Mario was originally able to throw MIPS and the developers had the intent of letting Mario throw him by the ears. However, this wasn't done due to time constraints and perhaps some internal conflicts relating to animal abuse. Some players however swore by being able to throw MIPS, and vividly remember doing so. Many have then tied this to the Personalisation A.I. allowing MIPS to be thrown.

With that, it's actually possible to throw MIPS in the most circulated version of the game but only in a body of water[2]. This can only be done by clipping into the area where the pillars that control the moat level is found, and can only be done before the moat is drained.

MIPS Clip is the name given to a glitch commonly used in the 16 Star speedrun. The glitch allows Mario to clip through doors using MIPS, and can take MIPS with him if he percisely turns around by crawling and grabs MIPS, taking him through the door. This is used in a 16 Star speedrun to clip MIPS out of the basement corridors, and then to clip through the 30-star door leading to Dire, Dire Docks and Bowser in the Fire Sea. 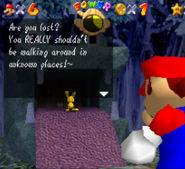 Image of MIPS in some unknown area, sourced from the iceberg explanation image. Origin unknown.
Add a photo to this gallery

Retrieved from "https://sm64-conspiracies.fandom.com/wiki/MIPS?oldid=1644"
Community content is available under CC-BY-SA unless otherwise noted.