Big Boo's Forest is described as a night-time outdoors area with dark green or black grass and similarly colored trees. The most common enemies reported are Boos, Scuttlebugs and Dry Bones. Several people report a cabin or building found somewhere in the level. The level is also reported to have very little coins, with most coins having to be obtained from enemies.

The most common stars in this level are obtained by collecting 8 red coins, 100 regular coins, finding a star in the building, and/or defeating a Big Boo. Notably, in the reports that claim this level is a full course, one star is unobtainable, making finding the names of all missions impossible.

Big Boo's Forest was first believed to exist when people analyzed the Big Boo's Haunt skybox, which is a forest, despite the fact Big Boo's Haunt is not in a forest, instead being found in a cage in the Castle Courtyard. However, the level itself was not discovered until recently.

The building that can be found in the level is theorized to be an area seen in the Spaceworld 1995 Build, an area with Boos and a brick wall. Most reports claim the building looks generally similar to this area.

The level is theorized to be the scrapped 37HORROR2 level, considering that the level has a "spooky" theme similarly to Big Boo's Haunt. This level is also believed to be scrapped due to simplicity.

Some people theorize that the Ghoul Medal might be found in this level, as the Ghoul Medal is supposedly found by escaping the cage around Big Boo's Haunt. Notably, a small number of reports back up this fact, most oftenly finding the Ghoul Medal inside of the building in the level. 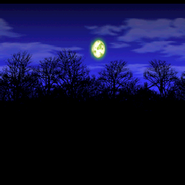 The area in the Spaceworld 1995 Build theorized to be the building in Big Boo's Forest.
Community content is available under CC-BY-SA unless otherwise noted.
Advertisement